This is a ticket only event , 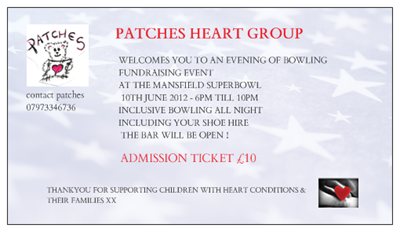 Hi folks we have several people taking part in the Ashfield family mile on the 15th April at Ashfield school at 10 am , anyone else who wishes to join us can please contact us for more information x many thanks maria & adele xxxx

We are currently in the process of sorting out a charity bowling night in june at the mansfield superbowl ,date ,time and price of tickets to be announced shortly ..........

What’s in the Mansfield Chad this week?

Mums and children who attend a parent support group at the Summer House in Sutton for children with heart conditions.

THE stress and worry of having a child born with a serious heart condition is something that no parents want to deal with alone.

But in the Ashfield area, help was not immediately at hand for such families until Sutton mum Maria Linfield decided to take action and set up the Patches Heart Group.

Said Maria: “I found that when I had Casey I felt very isolated.

“There were no local groups where I could go and talk to parents going through the same sort of emotions.”

Maria decided that the best way to address this was to start up her own parent support group for families whose children have heart problems.

Thirty-four families are already on the members’ list, many of them friends or acquaintances of Maria who she has been contacted by because of their children’s heart conditions.

Nyssa Levy (28), from Sutton, has a son called Harvey (5) who has a rare genetic deletion condition that means he has epilepsy, his development is delayed and he has heart problems, needing a heart operation at five-months-old.

Nyssa said that sharing experiences and information with other parents is a great help.

“It’s really nice to talk to people who are in a similar situation to you.

“You do sometimes feel lonely so it’s good to talk to people with children like yours, even if you don’t have exactly the same experience,” she said.

Laura Wilson’s son Taylor (5) was born with truncus arteriosus, meaning he did not have a proper pulmonary artery and had a big hole in his heart.

He had his first heart operation at just 13 days old and doctors were not sure he would make it through afterwards.

The support from other parents who have seen their children go through similar things is a comfort, said Laura (32), from Kirkby.

“There’s always someone on the end of the phone or on Facebook,” she said.

“There was nothing local other than going back to Glenfield, so it’s nice to know there’s something on your doorstep.”

Though Patches is still in its infancy, the response so far shows the great need there was for such a group.

“It’s still very new and we are looking at other premises on additional dates so we can reach families further afield,” added Maria.